Something for Human Beings 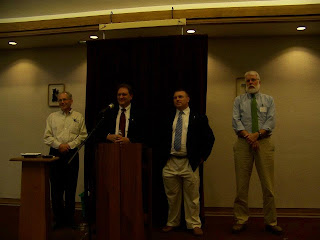 One way to transform the culture is to get men drinking and smoking again.

"Transforming the Culture" was the theme of this year's Chesterton Conference in Rochester, New York, which 150 eager Chestertonians attended this past weekend.

It was an honor for me to be included in the line-up of presenters, including Dale Ahlquist delivering a speech entitled "Apocalypse Later", Tom Martin (the John Senior of Nebraska) speaking on Chesterton and the culture of America, and Joseph Pearce delivering such gems as

When you experience beauty, you cannot help having a sense of gratitude. Beauty does not exist in isolation: reason & love go with it.

He really needs to stop relating everything to God.

(I love that one) and

Unless you're willing to spend 4 hours on one page you can kiss your thoughts of an A goodbye. Very difficult professor.

But back to drinking and smoking.

It was the party after the conference (the party is the "end" and the conference is the "means"). I sat with perhaps fifteen other men in Lou Horvath's screened-in patio as the rain fell hard on a chilly October night, the darkness surrounding us, cigar smoke filling the room, whiskey, good wine and good beer flowing, the ChesterBelloc Drinking and Debating Club in full swing. 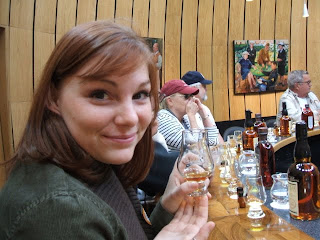 David Higbee of St. Irenaeus Ministries and I were sharing an intense conversation over Kentucky bourbon about evangelizing through drama. (Kentucky bourbon shown here, as modeled by an Upstage Actress for a picture I took at an unidentified tasting room in Kentucky. Note: it was either include a picture of this gal or of David Higbee, so I did what I had to do.)

And David said to me something that will always stick in my mind. We were talking about how most Catholic drama and Catholic comedy and Catholic programming is utterly bad (I've touched on this elsewhere). And David said simply, "We need to be putting stuff out there that human beings would want to see."

Now think about that.

And think about the stuff we try to pass off as our attempts at Transforming the Culture. And think about how much of that any actual human being would want to sit through.

By contrast, the True Believers, the hard core and long suffering residents of the Catholic Ghetto aren't that picky. They grasp for straws, producing and consuming stuff that hardly rates as culture much less culture transformed. But if we're going to appeal to the pagans and agnostics and lapsed Catholics in our midst, we must do so with art that's honest, that's authentic, that engages, that is not contrived, not didactic, not dreary, not self-indulgent, not boring, not bad.

The True, the Beautiful and the Good echo the glory of the Holy Trinity, and we dare not as artist or audience settle for the Trite, the Banal and the Mediocre.

These sorts of insights only come by way of cigar smoke, bourbon, a chilly night, the pouring rain, and true Christian fellowship.

This is because there's something dangerous in men of like mind smoking and drinking together, united in a love of Christ.

There's nothing dangerous about Kumbaya, about "the sign of peace", about sitting in a circle and sharing. The one is living and has gonads; the other is the emasculated product of the same society that's trying its best to re-bury G. K. Chesterton.

Thanks to Lou and Jeanne Horvath and to everyone who attended this year's conference. 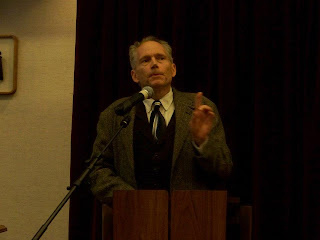 This is so awesome. Reminds me of how Dr. Peter Kreeft opened my eyes to this point when I heard him say in his talk, "Shocking Beauty," that out of the three ideals of Truth, Beauty, and Goodness, the one we Catholics have lost out on is beauty. We're pretty moral, and our thinkers are pretty damn smart, but we're boring and lame. We're not grabbing hearts and intuitions. We've fallen behind in art, music, and culture in general, where the Church used to lead Western civilization.

Let's get men drinking and smoking again. I think old Screwtape wants to isolate modern man from vulgar pleasures (though this is impossible) so he'll have fewer simple and frequent experiences in his life to be thankful for, and thus, be less likely to thank and lift up his heart to the Giver. Enough time in a sanitized, white room might persuade one to forget about the sun.

God bless, Kevin, and I love your stuff -- the videos, the acting, the blog, the thinking, the Chestertonianity, the Catholicism, the whole package -- and I'll be sure to keep coming back for good insights and great entertainment.

It was great to be there! Hope you swing by Rochester more often--it's a pretty desolate place, as I'm sure you've heard/discovered. (Also, I've been talking you up all over studio. Extra PR.)

Hey Kevin, are there mp3s of these talks floating around somewhere? I'm always looking for something to stick on my iPod.

That's why Fr. Barron's Catholicism documentary is so important. It shows the Truth, Beauty and Goodness of the Faith in such a compelling and polished way that it appeals to secular broadcasters, as it is now being shown on dozens of PBS stations across the country. More info at www.catholicismseries.com

Make a good film, book, poem, song, whatever, and it will appeal to a wide audience.

That's how you change the culture.

"The True, the Beautiful and the Good echo the glory of the Holy Trinity, and we dare not as artist or audience settle for the Trite, the Banal and the Mediocre. "

Amen to that! That's what we are hoping to do at John Paul the Great Catholic University.

JMJ Shame on You for Promoting an Evil uasge of Tobacco. Millions of people Die because of tobacco usage and You Glorify it. (Pipes, Chewing, Cigars, Cigarettes) The alcohol,Cigar or the Smoke has Clouded your Intellect (Reasoning, in case you Forget)You don't see the Evil you are Promoting. Chesterton death was probably due to Obsesity (Gluttony, Tobacco Consumption,as in Swallowing smoke from Burnt tobacco leaves, Smoking Cigars)Even our Bishops/Priests etc. support the Sinfulness of it.Respectfully with Love.

We now know that smoking is bad - really bad - for your health. It's bad to the extent that it's immoral to endanger your health by taking up smoking.

Let's not discredit good points by pretending that we can just plunge headlong into the past, without any discrimination and ignoring genuine advancements.

The Art of Missing the Point.

I don't smoke myself. I hardly ever drink. But this post is not about drinking and smoking.

The Art of Missing the Point.

So as not to hijack this comment thread for the sake of a secondary point, I hope it's all right if I just post a link to a little of my opinion on smoking:

I'll be happy to carry on a more direct conversation about teetotalism, modernism and such over there.

My only issue is that I can't stand the smell, and I prefer to breathe cleaner air. So I sit or stand downwind. Cigarettes are usually the big problem--they've been heavily processed. Heavily processed anything is bad for you.

Back on track! The best way to have great conversations with people is to catch them relaxed, at a party or something. Lou Horvath has the right idea.

Well, Derek, I'll continue this conversation here rather than on your blog, if only to try to "clear the air" here.

You see, I hate cigarette smoke. And there really is, despite your hope, plenty of evidence to indicate not only that it's bad for your health, but that nicotine is highly addictive. I lost many members of my family to emphysema, and smoking clearly played a role - though that's an anecdotal assertion, it's still an obvious one, and I can go into details on this some other time.

Well said, Kevin. I just deny that there's reason as of now to think that tobacco is risky enough intrinsically (not considering overuse, addiction, subjective problems, etc.) for us to condemn its use altogether.

I do want to revive smoking and drinking! Especially drinking.

I think, in general, that more people should use tobacco these days just for the sake of fun and gratitude, for the reason that otherwise they're just missing out on something neat and lawful that God gave the earth. I think it would help cure the modern epidemic of hypochondria, too.

But anywho, now I'm shutting up about it, so that readers can go on talking about the main purpose of this post, which you were talking about in the last paragraph of your last comment.

If this post isn't about legitimizing tobacco, then why did you talk about legitimizing tobacco? As others have pointed out here, tobacco tends to be dangerous. I remember a health course I took once. According to that course, even if alcohol should be consumed in moderation, tobacco ought to be avoided. I say we NOT get men smoking again (even if there are a lot of people smoking already)

Thank you for this recap of what I'm sure many a Catholic man has thought while trying to sit through an "I'm OK, you're OK, let's both be OK together and hug each other" type of homily.

If only we could hear such honesty from the ambo. I feel more people would attend Mass if they felt like the priest really was engaging them, instead of trying to create soft touchy stories that sound like they came right out of Reader's Digest. Let the culture war continue.

@Brian A Cook: Everything in moderation. Nothing wrong with a cigar or a pipe (or even those dreaded cigarettes) every now and again. Same with a nice glass of your favorite adult beverage.

I don't mean to pick on you, but your comment highlights something endemically wrong with modern society: the belief that because something can harm you, it is therefore evil. Tobacco and alcohol are moral neutrals, which can be used responsibly or negatively. If avoided, no big deal; if used, use them well :).

I've heard that the Holy Father enjoys the occasional red pack Marlboro, but I haven't been able to confirm it. You may recall that one of his favorite beers is Stutgarter Hofbrau.