C. S. Lewis says somewhere that we can't begin evangelizing our neighbors by trying to convince them to stop fornicating.  Fornication is so enjoyable, so natural, and so normal for them that they'd reject the Gospel outright if it began with a prohibition against such an apparently innocent pleasure. 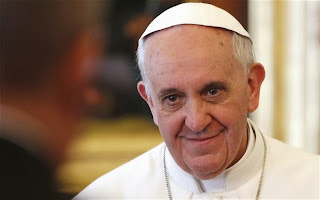 This is what Pope Francis is saying, though he's not talking about fornication.


“We cannot insist only on issues related to abortion, gay marriage and the use of contraceptive methods. This is not possible,” he said, explaining that this would not be the fullness of the Gospel, but instead a “disjointed multitude of doctrines to be imposed insistently.”

While clarifying that he is a “son of the Church” and agrees with its teaching on these topics, he added that “when we speak about these issues, we have to talk about them in a context.”


And the context is the love of God, and the identity of the whole human person - the nature of who we are and what we are made for.

This is a context that is utterly alien to the modern mind.  The evils of abortion and contraception, of sodomy and fornication, only become fully evident in the context of a much broader vision, a vision of reality that orbits an entirely different sun; it's of a different solar system, and it is naive of us to expect virtue to grow without the seed, the soil and the water it needs - and without the sun that brings it to life, which is not the star that we're orbiting now.  And so if we focus on acts outside of the context in which our acts have significance, we end up pitching a “disjointed multitude of doctrines to be imposed insistently.”

Understanding Scripture shares this same problem.  No part of Scripture can be understood outside of the context of all of Scripture: the panorama of Salvation History is necessary in order to appreciate any single event in it.

But this is also true for life.  There are many first rate Scripture scholars who do indeed see the whole picture as well as the details in the Bible, but who can not read Scripture or Salvation History in their proper contexts - which is life itself.

Thus, many can read, for example, Shakespeare with a certain skill, but can't read life - can't read the message of the flowers, the sunshine, the message of suffering, or the face of their best friend.  And so can't really read Shakespeare, however adept they may be at various details or technical nuances.

In conclusion, then, there is nothing wrong with pronouncing the evils of abortion and contraception and sodomy.  But we must keep in mind that these sins are symptoms, and it's the disease Jesus heals, not just the signs of the disease.

The text can never be understood without the context - and for a Christian the context must always be the fullness - the jarring and disturbing fullness - of the Incarnation and of Love.
Posted by Kevin O'Brien at 8:58 AM

Splendid! Huzzah! This is real Christian leadership, surprising people with the gospel of grace.