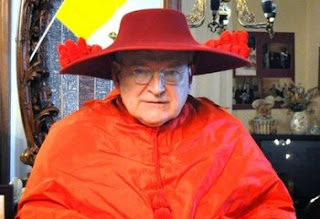 For those of you sane enough to stay out of Church Politics, the story of the past several weeks has been right wing Catholics having a meltdown because Pope Francis hates Cardinal Burke.

But it turns out that the left wing is having a meltdown because Pope Francis loves Cardinal Burke!  Read the comments at this post over at Bilgrimage and you'll see what I mean.

What interests me is that there is some truth to be found here underneath all the hysteria.  As Bill Lindsay writes ...

I'd add that Burke has disproportionate sway within economic elites, particularly in the United States, who try in every way possible to influence the direction taken by the Catholic church at its top leadership level — to mute its teaching about socieconomic justice, and to use select culture-war issues, notably the abortion issue and the issue of same-sex marriage, to continue a politics of divide-and-conquer, reinforced by the religious right, that extends the political power and control of these elites.


There's a great deal of truth to that.

And because we're all miserable sinners, the real schism in the Church runs down this divide:

In both cases, ideology trumps the Faith.

And this is what Pope Francis has been saying.  Francis has been very even handed in criticizing both the right and the left, and keeps insisting that ideology blinds us, and that the only way to get beyond the narcissistic infighting in the Church is to reach out with love to those in need - which is everybody.  Jesus Christ annoys us because He keeps drawing us out of our comfort zones, including our precious ideologies, our prejudices, our man-made false dichotomies, our "happy blending of good and evil things".

And let me add that I know Cardinal Burke.  He was very instrumental in helping us when we started Theater of the Word Incorporated here in St. Louis seven years ago.  He's a man of deep sanctity and compassion and he doesn't seem to have a political bone in his body.  Honestly.  Any archbishop with a politician's sense would never have tried to fix the problem at St. Stanislaus, for example.  Perhaps with more political acumen, Burke would be more aware of the flames his fanboys are fueling on the internet (Lifesite News, to their shame, has been using this hysteria to try to sell subscriptions, for crying out loud).

But I've complained a lot about bishops who are nothing more than politicians - people pleasers.  Burke is not that at all, and I doubt that Francis is either.  Maybe that's why the right and the left are finding both of them so hard to read.

And here's a hint that the Catholic Church is what she says she is and that Jesus Christ was more than a mere man.  Where else on this planet or in history does any institution teach consistently things that offend half of its base?  Where else will you find anything on earth that trumps the left / right divide?  The only way to get beyond the limitations of ideology are with love, in friendships, in the family - and (as much as the people in the Church drive me crazy) in the Church that Christ established - divided and torn though it currently is.

Email ThisBlogThis!Share to TwitterShare to FacebookShare to Pinterest
Labels: POLITICS

Could not disagree more. Pope Francis is a destroyer. Pure and simple. A wolf in sheep's clothing. Has been since the day he walked out on the balcony, after the Modernists elected him and pulled one over on the Church.

All the insults and heretical nonsense coming from his mouth the last couple of months was mind boggling enough, but many finally many wised up when he revealed his true colors at the synod. The world finally saw the horror of Francis working with his friends like Kasper to pervert the Gospel. Their blatant attempt at attacking and changing Church doctrine.

The following is a ridiculous assertion and a strawman, very offensive:

The right wing ignores Church teaching on economics, social justice, torture, lying and makes fun of the centrality of the command to "love thy neighbor".

Asbury, but wasn't it God who appointed Francis to be Pope?

Michael, the cardinals are supposed to choose the Pope under the inspiration of the Holy Ghost, but that is not always the case. The cardinals being men with free will, can reject this inspiration if they so desire.

God certainly allowed that Francis be elected for whatever reason. St. John Eudes said that when God is angry with his people, he sends them bad priests as a punishment. God could have allowed Francis to be elected as a chastisement on the Church.