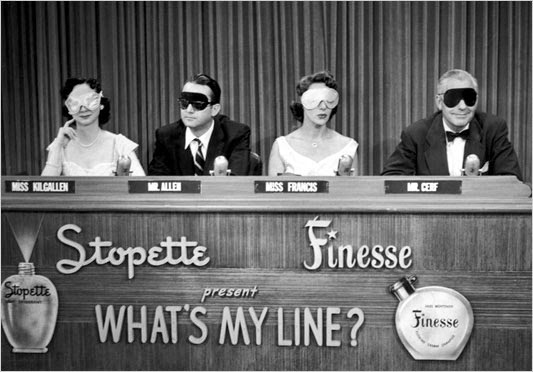 In Community Theater and even in a few semi-pro or professional productions, the question is typically not "How good is the show going to be?" but "Will the actors know their lines by the time the opening night curtain goes up?"


This is why, whenever I direct anything, I always demand that my actors know all of their lines before rehearsals begin.  This is because there's no easier way for an actor to sabotage his own performance and those of his fellow actors than by not knowing his lines.

In my recent post It's Not the Abuse Crisis - It's the Neglect Crisis, a few commenters have been offended at my casual assertion that the Catholic clergy are "predominantly homosexual".  They have challenged me to provide evidence of that.

To begin with, there's the enormous anecdotal evidence - but this is no real proof, both because it's anecdotal, and also because most "gays" in the clergy are in the closet.  But there are some real studies out there.  There is the magnum opus of Randy Engel The Rite of Sodomy, now available in ebook format for only $10.  There's also this shorter, but very well researched and documented paper by Dr. David Pence, The Erosion of Priestly Fraternity in the Archdiocese of St. Paul & Minneapolis.

What we learn from Pence's paper is that fornication, adultery and sexual perversion were not only tolerated in the major seminary of St. Paul, but in fact encouraged and defended, presented as something normal and healthy.  This has produced what you would expect - a majority of priests who are homosexual and sexually active, along with a minority of priests who are heterosexual and sexually active.

And this is no different than mounting a production without knowing your lines.

If a person attempts to be a Christian - and especially a priest of God - the sine qua non, the starting point, the "without which there is nothing" - is swearing off grave sin.  You can no more lead others to God while you are freely engaging in grave sin than you can perform Hamlet by sneaking a peak at cue cards in the wings or the "To be or not to be" speech scrawled in ink like a cheat sheet on the backs of your hands.

This is the main reason that our Church is in a mess.  Our priests and bishops have given themselves over to grave sin and are winking at one another (often from one pillow to another in bed) while they convince themselves that everything is all right.  This is why bishops tolerate child molesters and put children in harm's way.  They are so used to the deception and hidden pride that a secret devotion to sin engenders both in their hearts and in their community, that they become seriously corrupted, worm eaten and rotten to their very core - all the while smiling their benign smiles and looking neat and presentable in their clerical shirts and collars.

This infiltration of grave sin into the rectories and sacristies of the clergy is matched by the infiltration of grave sin into the living rooms and bedrooms of the laity.  We have accepted, approved and even treasured the darkest of sins - and not just sexual sins like abortion, contraception and pornography, but also (for many of us) an excited vicarious love of Torture, a devotion to the glories of Lying, a lifestyle built on green and Unreality - and so on.

My spiritual director once said to me, "First, you've got to overcome committing mortal sins.  Then we can start to work on making spiritual progress."

Nothing can be done on stage, in the Church or in life until you take the first step.  And if we refuse to give up - or even acknowledge - our serious and deeply disturbing sins; if, in fact, we attempt to justify and take pride in our corrupt and despicable behavior, then that first step can never be taken.

Now after John had been taken into custody, Jesus came into Galilee, preaching the gospel of God, and saying, "The time is fulfilled, and the kingdom of God is at hand; repent and believe in the gospel." - The first words of Jesus as recorded by St. Mark - (Mark 1:15).  Note Our Lord's advice on how to begin at the beginning.

A quick Google search reveals that Engel believes that Paul VI was an active homosexual, has grave doubts about Benedict XVI's "manliness" (it's the clothes) and in a recent letter insinuates that Pope Francis is almost certainly a sexual deviant.
Have you read her book? She sounds, to put it mildly, completely nuts.
Anyway, why the hell am I talking about this? I've got midnight Mass in half an hour.
Have a blessed Christmas!
- Harry from Wales

anecdotes and "estimates" by those with an agenda are notoriously inaccurate. Andrew Greeley wrote a lot of exposes on problems in Chicago but also defended priests against those who gave out huge estimates that exaggerated the problem to push their agenda.

I know about pedophiles in the priesthood (and among public school teachers, and among the protestant clergy and by physicians, and also in high school cliques that preyed on younger girls at one high school where I lived).

But I also know priests and nuns and doctors who died martyrs. Which ones are more "typical"?

These things balance out.

I lived in a diocese notorious for their coverups, so when one of our young priests eloped with the catechism teacher, our hard working pastor could only sigh and say:"Well, at least it was with a woman".

Be not afraid: Jesus has conquered the world.

Harry, no, I have not read Engel's book. But I have read Pence's report, which seems sadly true. I have read one part of Engel's book - her report on Fr. Urrutigoity, which was factually accurate. Meanwhile - and more importantly - Merry Christmas!

Tom Richard,
The natural selection of the priesthood involve a calling that is sexually unusual - chastity. Certainly, I committed sins against chastity as a young man, as did everyone I know. Society, since the late 60s, has made it too damn easy to engage in serious sin and delude yourself into thinking, "oh it's not that bad." It is that bad, and anyone who's engaged in it knows the severity of the consequences, which linger for quite a while.

Given that societal framework, a call to "chastity" can easily be translated to a call to "avoid women", which in turn leads to "well, everybody needs an outlet." I've often been tempted to call the priesthood an unnatural calling because of this. Yet, the entirety of my youthful training was in the presence of religious who had made that choice - Theresian sisters and Jesuit priests/scholastics, not one of whom ever touched any of us except in reasonable discipline. So it is an unnatural calling in the sense that it is a supernatural one. (BTW - this evidence is more than just the opinion of this writer - at my Jesuit High reunions, we've discussed this at length. None of us ever experienced even a hint of abuse at the hands of the Jesuit priests. Same is true for grammar school under the Theresians).

I firmly believe that the priests I grew up with were called, and that the priesthood today is a dim reflection of the men of that era. Concurrently with that has been an explosion in purposeful ignorance of the Catechism, which isn't even taught with seriousness in Catholic schools. We used to teach intolerance of sin - now, there are lay "theologians" teaching that we have to be "tolerant" of everything!

The only conclusion I can draw is that something of societal origin has corrupted us all, and the priesthood is part of society. I don't know what led society in this direction. You can call it Satan, and the vehemence with which it is promoted certainly reflects a Satanic anger, but I see no solution other than prayer. The horse has left the stall.

As far as Engel's suspicion of Pope Benedict, nothing is really known about Ratzinger's sexuality. There is really no reason to speculate. It's charitable to just not speculate about his sexuality until something concrete becomes public. As far as his clothes, they had always been chosen by his private secretary Msgr. Georg Gänswein. His wardrobe was the result of his secretary's influence.

Randy Engel is right about Paul VI. Pope Paul VI's Homosexuality was a well known fact. Anybody can find out this info with just a google search nowadays. When he was Archbishop of Milan, he got picked up by police walking the gay red light district of Milan in the middle of the night, wearing plain clothes. Then there was the reports that Italian movie actor Paolo Carlini was his secret boyfriend who would meet him at nights in the Papal apartments. All this is public knowledge which stopped his beatification dead in its tracks decades ago, until the insanity of Pope Francis beatifying Paul VI, along with the canonization everyone else and their mother by ignoring and breaking the canonization process.

A google search turned up only salacious gossip about Paul VI