Dialogue with a Puritan

In preparing for my upcoming radio interview (which starts in 14 minutes), the subject of which is "Bringing Literature to Life", and which will be directed at an audience of homeschooling parents, my thoughts drift to the challenge of all literature - which is putting life into its proper context.

With that in mind, here's an excerpt from a post of a few years back in which I dialogue with a Puritan about the comedy murder mysteries I write and perform, and in which I attempt not only to justify myself, but the whole point of comedy and drama ...

“Sin is funny,” I said. “In our mystery Slay It Again, Sam, the Humphrey Bogart character, after Ingmar Bergman leaves him, enters into a purely physical relationship with his personal secretary, Brandi, played by a woman in the audience. We make it clear that their relationship is not a chaste one, and we get some laughs from that.”

“An affair is a serious sin! It is never funny!” the man objected. 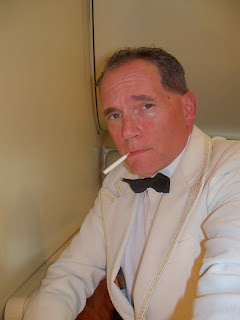 “Well, fornication is indeed a serious sin,” I replied, “but we are all sinners. Made in the image and likeness of God, we nevertheless waste our lives on things that are unworthy of us – like fornication, and anger, and greed. Everyone in Slay It Again, Sam is searching with a passionate greed for the Maltese Chicken, a rubber chicken worth millions of dollars. They’re willing to kill each other to get it. This is funny. It’s funny because it’s incongruous. It’s not what we should be doing. It’s not what we were made to do. It shows how ridiculous we are when we try to act like little gods, when we go after only the things we want. But it was ever thus. Don’t you see? Without being able to laugh at our sinfulness, it’s far too easy to take ourselves seriously. Humor is a form of humility. We’re all in this boat together. We’re all sinners, and we might as well acknowledge that and laugh at it.”

“For that matter,” he replied, “Murder is a sin. You’re making light of murder in your ‘murder mysteries’.”

“There’s a difference between the depiction of sin and the endorsement of sin,” I answered. “If sin were never to be made fun of or examined, all drama would have to be banned, for that is what all drama is about. Hamlet revolves around murder – and also revenge and lust and so forth – all serious sins, and all examined seriously in drama. Should we never perform Hamlet? Never perform any drama – serious or humorous? The Puritans banned drama once, you know …”

But he was peering at me with an even colder stare.

I concluded. “Humor comes from God. It is a divine gift. God has a sense of humor. If He didn’t, we wouldn’t. We couldn’t. If you reject depicting the sinfulness of man and laughing at it, you’re playing right in to Satan’s prideful hands, and you are giving up a gift that only a creature with reason and will could have, a gift you should cherish, use properly, and not suppress. You are giving up a sense of humor.”

I thanked him for meeting with me and left. I knew it was both a failed sales call and probably a failed witness.

Email ThisBlogThis!Share to TwitterShare to FacebookShare to Pinterest
Labels: HOW TO READ, PURITANS

While I published the Audiobook the Joy and Humor of the Saints to show that humor has a place in the spiritual life.
http://www.alleluiaaudiobooks.com/catholic-audiobook-the-joy-and-humor-of-the-saints/

I also am aware that laughing was not always held in esteem, and even detested by many Holy Men (especially the Desert Fathers) of the Church. Their objections are not puritanical, based on pride, nor did they not have joy in their life.

* I meant to say that they did have joy in their life.