The Movie and the Meta-Movie: Reflections on "The Interview" 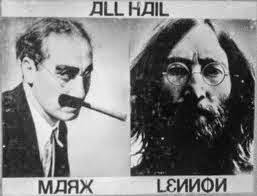 People don't realize how important we are to freedom.  The first thing a totalitarian society suppresses is its comedians. - Groucho Marx

John Lennon said something similar, which was that nobody would ever take him seriously enough to try to assassinate him the way they assassinate politicians, because he and Yoko were just fools - just comedians.  Of course, this was before he was assassinated.

So on Christmas Day, my son Colin and I thumbed our noses at North Korea - or whoever hacked Sony - and watched The Interview in the comfort of our suburban American home.

The movie was funny and provocative - more so because of the Meta-movie (the hack and the terrorist threats) - than the film itself.

In fact, the movie is quite bad in some ways.  There were parts of it that were utterly offensive and juvenile - not because I find gross out humor unfunny, but because it's obvious that corporate-think is behind so much of the garbage Hollywood feeds us these days.  Hollywood Rude Comedies are test marketed and aimed primarily at frat boys, or 14-year-old morons who will soon become frat boys.

And so, in the same way that every single movie made for young kids must have exactly three fart jokes, so Rude Comedies are now (apparently) required to include at least one joke about pornography and semen - regardless of how uncomfortable it makes you or how forced and unnecessary the joke might happen to be.

And this movie had that (and then some) - and that offends me, because it's so obviously a corporate insert designed for a specific effect.  The obligatory vulgarities seemed unrelated to the movie's artistic merit or integrity.

Which is a shame, for this film does have some artistic merit and does have some integrity.  It is a cut above most Rude Comedies, despite the uncomfortable moments.

And that message is this - rude, crass and vulgar as our American pop culture is, there is something authentic and liberating about it, something funny and spontaneous and alive, something Real - and our humor can topple tyrants, the way our typically American chewing gum topples a bad guy in a disturbing and yet strangely funny scene in this movie.

And indeed Lennon and Marx may long survive Lenin and Marx.

And North Korea has a long way to go before they learn this lesson.

I've seen a previous Rogen-Franco collaboration, This is the End. Perhaps, we need totalitarianism just so we can have sensible aesthetic standards again.

Never has Marx's famous dictum been more true: "History repeats itself, the first time as tragedy, the second time as farce." I would say that this is a sophomoric version of the Rushdie Affair, but I really don't want to insult sophomores.