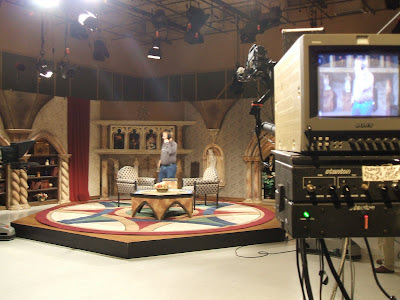 So we all know from the above post that Kevin's going to be on live nation-wide TV Wednesday night. But what's Kevin doing at EWTN in the first place?

Kevin O'Brien will be hosting a 13-part anthology series on Christian drama, and interviewing the actors and celebrities who will be featured in the series. The episode line-up is scheduled to run as follows:


1. INTRO EPISODE - Kevin speaks about his career and how acting helped him to discover the Holy Spirit working in his life. Kevin also interviews Lola Falana, Fr. John Hogan, and a number of the actors who will be featured in the series.

2. THE JOURNEY OF ST. PAUL - Kevin and his cast perform a dramatic adaptation of the life of the Apostle to the Gentiles.

3. ALESSANDRO - Jeremy Stanbary performs his one-man show on the conversion of the man who murdered St. Maria Goretti.

5. THE BIBLICAL TRILOGY I - KING DAVID - Kevin stars as the hero of the Old Testament.

6. THE BIBLICAL TRILOGY II - THE GOSPEL ACCORDING TO MARK - Richard Garey performs the life and ministry of Jesus Christ.

7. THE BIBLICAL TRILOGY III - THE PASSION NARRATIVE - Kevin's one-man show, taken from the four Gospel accounts of the Passion and Resurrection.

9. OLD THUNDER - AN EVENING WITH HILAIRE BELLOC - Kevin's one-man show as the bombastic and unforgetable writer who thunders across the screen.

10. LOLEK I - Jeremy Stanbary as the young John Paul II.

13. AT THE (EWTN-MADE-FOR-TV) MOVIES - In the conclusion to our first season, Kevin O'Brien and Dale Ahlquist critique the TV adaptation of Chesterton's "The Surprise". And Kevin interviews himself (dressed in a chicken suit).


Sounds like a great series, right? Can't wait to watch, right? Want to know when it's on???

Well, stay tuned. THE THEATER OF THE WORD INCORPORATED is expected to air September of 2009. That's a ways off, but in the meantime ... don't touch that dial!
Posted by Kevin O'Brien at 8:00 AM

Email ThisBlogThis!Share to TwitterShare to FacebookShare to Pinterest
Labels: EWTN