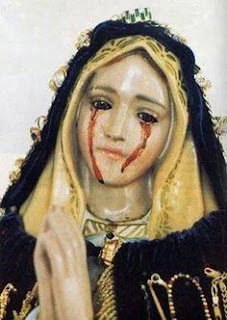 I am hearing from devout Catholics who are upset about this story ...


An Oklahoma City satanist says he plans to protest the Catholic Church’s beliefs about Jesus’s birth by pouring costume blood over a statue of the Virgin Mary outside of St. Joseph Old Cathedral on Christmas Eve.

Adam Daniels says he hopes his display, titled the “Virgin Birth is a Lie,” will expose the “lies” of the Catholic Church, reports The Oklahoman. The satanist states the virgin birth of Jesus is a fraud.
“The purpose of the blood is to add another layer of corruption to Mary, which is an emblem of the Catholic Church,” he said. He also plans to cover the statue “in sulfur powder and ash.”
Daniels obtained a permit for his “display,” set-up for which is permitted to begin at 4:30 p.m. and must be removed by 6:15 p.m. His protest will be restricted to the sidewalk outside the cathedral, and he is not allowed to block any of the church’s entrances. The permit also requires that he clean up the entire display and ensure no materials are left on the sidewalk.
According to the news report, Daniels is protesting the Catholic Church on Christmas Eve due to the archdiocese of Oklahoma City’s recent demonstrations against his group’s “black mass,” the unveiling of a Baphomet statue, and Daniels’ own book-signing event.
Throughout the past year, the Satanic Temple of Detroit has worked to promote abortion and same-sex marriage.
The archdiocese of Oklahoma City did not immediately return Breitbart News’ request for comment.


Here are my reactions.

First, it's very telling that Satanists are promoting abortion and same sex marriage.

Second, what the Oklahoma Satanist does not understand is how he's inadvertently witnessing for Christ.  Compare Caiaphas, who when he remarked in the Sanhedrin that it was expedient that one man should be put to death for the sake of many, did not realize how deeply his selfish Machiavellian purely-political words resonated and revealed the deeper and more solemn providence of God (see John 11:51).

Because, you see, Mary has already been covered with blood.  At the moment of her immaculate conception, she was redeemed and conceived in purity because of the Blood of Christ - which was yet to be shed (historically speaking), but by the virtues of this Blood alone are Mary and all of us made pure.

Having said that, it is our job to love these Satanists - our enemies - for as St. Paul says ...

If thine enemy hunger, feed him. And if he thirst, give him drink. For in so doing thou shalt heap coals of fire upon his head.  Do not be overcome by evil, but overcome evil with good.  (Rom. 12:20-21)