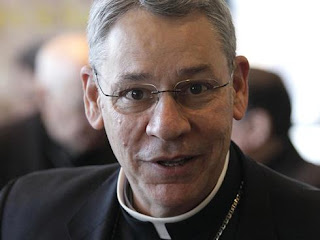 There's something about Christ and how we fail Him that we can learn from Kansas City / St. Joseph Bishop Finn.


Here's what Bishop Finn did  -

Got all that?  There's a lot more, but that gives a brief overview of what Bishop Finn did.

Here's what Bishop Finn should have done -

But I am saying this -

What we are seeing in Bishop Finn is what we see all around us.  Instead of successors to the Apostles (bishops) behaving like successors to the Apostles - willing to risk everything and follow Christ - we get middle-management bureaucrats.  A priest has abused children?  Don't tell the families!  We'll get sued!  Cover everything up.  "What would Jesus do? "  Hell, no!    Forget Christian charity, forget even human compassion, this is a corporation whose assets we've got to protect - though over a million of those assets will be used to keep my own sorry asset out of jail (even though jail time is inconceivable in a plea bargain over misdemeanors and I've really got nothing to fear).  And if I get a light sentence after all is said and done?  Well, my buddy Bishop Joe over in KC, Kansas will write another article claiming that's it's all the fault of the pro-abortion anti-Catholic media!  He'll back me up!  So will that Donohue guy who spun the whole thing last year so that everybody was at fault but me!  I'll come off smelling like a rose while Fr. Shawn Ratigan beats off to pictures of your eight-year-old daughter's crotch and panties that I refuse to tell you he took, just in case you might want to invite him over with his spy cam for her next birthday party.  And if the cops force us to tell you about it (they'll never get all the evidence, I saw to that), well, I'll hold a listening session and have you fill out a card telling me how the visual violation of your daughter and our enabling of it makes you feel.  Yeah, that's the ticket!

The time has come.  The Kingdom of God is at hand.

ADDENDUM: Here's a helpful timeline the Kansas City Star has put together on this case.

ADDENDUM 2: As I wrote this week, this circling the wagons trick to defend our own, whether right or wrong, is precisely why we aren't effective evangelists.

Email ThisBlogThis!Share to TwitterShare to FacebookShare to Pinterest
Labels: FINN

He was informed by letter by a Catholic School Principal at St. Patrick's Parish in Kansas City that parents and teachers were concerned about the behavior of their pastor, Fr. Ratigan, who was trying to spend time alone with students, who insisted on giving a little girl a massage at a church event, who was taking a lot of pictures of little girls, and in whose garden a pair of little girl's underwear was discovered. Bishop Finn ignored the letter.

While I'm a little neurotic about following up, if I am the principle, I don't just send a letter. Not to take any of the blame away from other parties.

Sad day - can't protect the most vulnerable again. I was thinking of situations where I know there is someone potentially dangerous that "we" don't do anything about in my own life. I thought of one example so I guess I can see how easy it is to do nothing - but even with that "perspective" I'm still in awe every time a case like this happens. Amazing how "we" can fail so perfectly.

Bishop Robert Finn was convicted on one count, sentenced to 2 years which was immediately suspended and told that he will have a criminal record...FOR ALL OF 2 YEARS.

What a travesty of justice. Finn, who should be removed as bishop there in Kansas City, is unlikely to be sanctioned in any way by the pope.

WHAT I CANNOT UNDERSTAND IS WHY FINN WASN'T CHARGED ON FEDERAL STATUTES?

Is there any doubt in anyone’s mind why the hierarchy of the RCC has lost all credibility? All Moral authority?

Finn was quoted as saying he"wanted to save (Ratigan's) priesthood," and "Boys will be boys."

So much for the SANCTITY OF LIFE as far as raped, sodomized and exploited children are concerned.

Everyone in ministry in the Roman Catholic Church should be OUTRAGED by the actions of Robert Finn.

Sister M-P has it spot on! Is she the only beacon of hope for truth and justice among our RCC clergy and religious? Where are the other voices of outrage? Cardinal Dolan where are you - such cowardice.

The KC judge found Bishop Finn guilty of concealing and not reporting sex crimes against innocent little girls. There are many other bishops who could have sat in that court room and been found guilty also. This is a beginning of getting this horrific abuse stopped. We hope the families of Fr Ratigan's victims can feel a sense of relief, even though Finn only got a sentence of probation. We hope they can sleep a bit easier tonight.

We have come this far in protecting kids because brave victims of clergy sex abuse are speaking up and contacting police. Like Finn has now learned the hard way, it is not the church officials who should be deciding or investigating child sex crimes, that is the job for law enforcement.

Thank you to the judge for this historic guilty verdict. This is just a start for some hope for the safety of our children and the future.