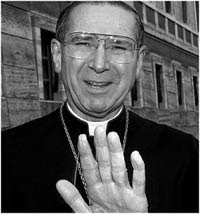 Well, there are many reasons.

But one reason is this.  It's because so few bishops do what Los Angeles Archbishop Gomez just did.


Reading these files, reflecting on the wounds that were caused, has been the saddest experience I’ve had since becoming your Archbishop in 2011. ... Effective immediately, I have informed Cardinal Mahony that he will no longer have any administrative or public duties.

Thus writes Archbishop Gomez, banning Cardinal Mahony, a "prince of the Church", from any public or administrative duties.  Why?  Because Mahony deliberately and with care and precision shielded child abusing priests from the law, shuffling them from parish to parish, and pawning them off on other dioceses.   He let the predators have continued access to their prey - innocent children - as long as it did not cost the archdiocese any money or him personally any embarrassment.  His reputation and the almighty dollar counted for more than the safety of children, for the effective treatment of priests, or for the service of justice.


were aware children had been raped and otherwise assaulted and were attempting to keep authorities in the dark. They discussed giving the abusive priests out-of-state assignments and keeping them from seeing therapists who might have alerted law enforcement.

Frank Weathers quotes Archbishop Gomez's whole statement here.   Also, for a glimpse into the mobster mentality of Cardinal Mahony, one of the worst bishops in the history of the world (for this and other reasons), see this piece here.


Abp. Gomez is doing the right thing - but it's nothing more than any good secular non-Christian man should do. There's nothing heroic about this virtue that Gomez is displaying; it's just doing what's right.  Why creeps like Mahony could not even live up to basic decency by worldly standards much less the standards of Christ and His saints is beyond me.

Email ThisBlogThis!Share to TwitterShare to FacebookShare to Pinterest
Labels: ABUSE

Why do you think child abuse issues have become such a problem over the past... (60?) years? It certainly seems that before modern times such a thing was extremely uncommon.

I'm certain that the rest of the world will continue to pin it on celibacy, though I much doubt that myself.

The modern world seems obsessed with the idea, no doubt for very "scientific" reasons and motives, that something will happen to them if they don't fulfill whatever sexual desires they have. I highly doubt the validity of such concepts. But it does lead one to wonder why there have been so many priests of this nature.

I don't know enough about how the system works to know if that has something to do with it.

Now, when will the vile Archbishop Rembert Weakland of Milwaukee finally stop being celebrated in the Milwaukee archdiocese? How much more damage needs to be done by this open homosexual before Listeki and the local leadership says, "Enough!"?

As a priest as well as being a victim of clergy sexual abuse the actions of Bishop Gomez are too little, and too late.

When I experienced my flashback in the fall of 2001 I was totally unaware of what was brewing in Boston. While I am a Boston priest, I had served in the USN as a chaplain and had retired in 1997. I chose NOT to return to Boston -- I did not know exactly why, but I knew I was not comfortable there. What kept me from returning was the slow realization that I had been raped.

The theology training I had received in the seminary has me "intimately" associated with the hierarchy. Theologically I am an "extension of" the bishop (or apostle.) In essence I am one of them in that I represent all that they say and do. After my flashback I went into counseling. I struggled to remain in ministry but it was becoming harder and harder. Each day that I read about Mahony's antics in the courtroom trying to evade the release of information or documents pushed me into a corner. I could no longer represent the bishops. I could no longer be a part of their conspiracy, their deception, their cruelty.

In November 2005 I contacted the Archdiocese of Boston and requested "retirement." I flew to Boston to meet with Bishop Lennon and within fifteen minutes was granted medical leave. I never did hear from O'Malley. I thought, surely, a priest struggling with remaining in active ministry would be worth a few minutes of his time - but that did not happen. I was scheduled to leave my assignment as chaplain at the Washington Hospital Center on 1 June 2006. On Tuesday of Holy Week I made the announcement at noon Mass in the chapel, and I explained "why" I would be leaving. Within hours I was reported to the Diocese of Washington and I was IMMEDIATELY relieved of my faculties,in short, I WAS FIRED for speaking the truth.

And so, thanks to the likes of Mahony, George, Todd, Brown and all the others, I languish outside of Ministry that I so enjoyed. As I said earlier, this "banishment" of Mahony is too little, too late.

When will people recognize that child abuse was endemic to the Catholic clergy. The first canonical statement re abuse of the faithful including children was in the year 900. And we're to pretend it's a new phenomena?Mahoney and his ilk need to be held accountable for their criminal actions. Now!

Jim, child abuse is endemic to the human race. The first child was abused long before the year 900. This is why the Church is not merely human - she teaches the truth about fallen human nature; and frequently her members display it.

You wrote: "Abp. Gomez is doing the right thing - but it's nothing more than any good secular non-Christian man should do. There's nothing heroic about this virtue that Gomez is displaying; it's just doing what's right. Why creeps like Mahony could not even live up to basic decency by worldly standards much less the standards of Christ and His saints is beyond me."

The reason is that grace builds on nature. You cannot attain Christ's standard if you don't first attain a human standard. True, Gomez did nothing heroic in sanctioning Mahoney: Any decent secular leader would have done the same. But attaining that level makes the next step possible: heroic action.

Archbishop Gomez only acted until he was forced by court order to release the files without blanking out the clerical names. Gomez has been bishop for two years and knew about these files, yet only acted when forced and after having the court reject the attempts of the Archdiocese lawyers to keep them private, blacked out, and not released to the public.

Now that Mahony has fired back on Archbishop Gomez, Gomez has clarified that Mahony is still a bishop in good standing who can publicly celebrate the sacraments.

As I understand it, Cardinal Mahoney is a Cardinal in good standing, which means he has universal faculties. Nobody can stop him from going anywhere he wants and doing what he wants, at least so far as sacraments, liturgy, and peri-liturgical things go. On the other hand, for lots of things at least, someone has to invite him, and after what happened with Cardinal Castrillon, well I wouldn't expect he'll receive any.

Seraph, I think you're right. If the diocesan lawyers were fighting the release of these documents tooth and nail to the end, then Abp. Gomez' high dudgeon is suspect at best.

I have a patient who was physically, emotionally, and verbally abused by her mother. The mother was eventually diagnosed with a mental illness. The patient, who is my age, said that when she was a child no one really talked about mental illness and family problems were handled by the family. I think this is why these claims are moving out now. People now "air their dirty laundry", so to speak, when before these kinds of things were "handled" within the family. This is no excuse for what the clergy culture has done and St. Peter Damian has very harsh words for Mahoney and the rest of the perpetrators.

There are no translations that I could find without subscribing to the journals. The above links are excerpts with commentary.